Home » Australian Art » A Golden Age of China: I dream therefore I am

A Golden Age of China: I dream therefore I am

I’m in a dream. The Qianlong Emperor (1735-1796) is there. He’s an art connoisseur and the longest living Emperor in Chinese history. During his reign, China became the wealthiest and most populous nation in the world. We’re at his place, the Forbidden Palace. There’s a queasy feeling in my belly, excited but nervous. The feeling I get round men who have so much, when I have so little. The Emperor has a big show on at the National Gallery of Victoria (NGV). It’s where we first met. He asks, cheekily, grinning: ‘Are you surprised to be in the presence of a God Natty?’

‘No’ I reply earnestly, ‘Gods are a dime a dozen back home in Australia. Just lately, we’ve imported Jean Paul Gaultier, Chuck Close, David Lynch, Tim Burton, Richard Avedon, Matthew Barney, James Turrell, and (coming soon) we’ll all be worshipping Andy Warhol, Ai Weiwei and David Bowie. Our art galleries use an inconsiderate and disproportionate amount of the public purse to preserve all notions of the immortal gods. It’s an expensive and highly orchestrated theatre used to build and maintain male power structures.’ I’m getting fired up now. The Emperor yawns.

‘It’s locating the Goddesses and conducting the revisionist histories, that the institutions seem to be grappling with. The Gods, they do fine. The tastemakers must have missed the memo Tony “Head of Women’s Affairs” Abbott sent out about women being creative too.’

‘Oh’, replies the Emperor, looking bored. He shows scant interest in this cultural pickle. But fuck him! It’s my birthday and my dream. I’m not going to shut up now.

‘The company line is keep up the gender stats. But if a tactic drags on too long, it becomes a drag. I reckon we spark up a match and burn some shit down. Creative Australia is as sexist as Corporate Australia. That’s the uncomfortable truth.’

‘Blah blah blah’ says the Emperor, just like the Jon Campbell tote bag. ‘What are you going to do about it?’ he goads.

‘Hannibal said We will either find a way or make one. We will make the enemy live up to their own book of rules. The answer lies within the Gender Equity Policies of Institutions. Sexism is bad, our society decided that already, we’ve allowed for lag time enough. We will challenge the policies against the realities, hopefully in court. I’m feeling litigious.’

We are wandering through the Qianlong Emperor’s impressive Forbidden Palace. Round another corner we go, like in a video game. He’s showing me his most prized possessions, all the indicators of the life of the super rich, filled with opulence and luxury. Gold is my favourite colour too. After diamonds. He loves art, he funds art, he makes art, and he burns books. Books he doesn’t like, in the bonfire they go. He calls them Literary Inquisitions, which is a creative use of words. It’s testimony to the threatening power of ideas to established status quo’s.

Still in the Forbidden Palace

We are considering the opulent eye candy of the Emperor’s exquisite collection, with the appreciation only real connoisseurs can share. The Emperors facial expression suddenly hardens. His body stands turgid before me. He turns, grabbing my shoulders and I confess to thinking he desires me to join him in that special way people sometimes do. He already has a collection of lady friends befitting a man of his stature. Does he really have the energy to deal with me too? I use the abacus to count up the 3 Empresses, the 5 Imperial Noble Consorts, the 5 Noble Consorts, the 4 Consorts, the 6 Imperial Concubines, the 9 Noble Ladies and the 5 First Class Female Attendants. It amounts to a grand total of 37 Very Special Women in the Emperor’s life. It’s like a feminist art show. You group all the women up together into a chorus line, then they each have less power. Same principle.

‘Gee Emperor’, I quip, ‘if your lady friends’ menstrual cycles all line up, you’re going to be right royally screwed!’ He doesn’t laugh at my aside. I’ve broken the sex mood too with the mention of viscous menstrual blood.

He confides with some urgency (and in surprisingly good English, even for a dream): ‘the mist you see outside nat, it is not mist; it is smog. Pollution. And it is choking us, slowly choking us and every other living thing on this poor planet. We are skinning her alive.’

I’m shocked. What I’d presumed to be an ordinary I’m OK but pretty angry/you’re OK for a despot ghost sort of dream, has suddenly been ruptured by the dangerously honest observations of an Emperor.

‘Nat’ he says hesitating, ‘nattysolo, we must now take radical steps to change our environments destiny. We are at a tipping point! OK, we’re well past a tipping point, but if we lose hope, we lose it all.’ He pauses, then continues, carefully: ‘I see it clearly. We can be divided into those who are part of the problem and those who are part of the solution. I can see it as clearly as I could see in the days before the smog blew in.’

‘Nature needs us to give her a rest. We’re over-cementing the earth. She needs to be able to absorb the rain, it cools her.’ I nod in agreement. We look into each other’s eyes and connect.

‘Imperialism, like capitalism, is insatiable. The market got it wrong, dead wrong. Pathological greed can never be fulfilled. Those who do not fight imperialism but acquiesce in it, lead lives which have become increasingly devoid of meaning. Hence the spiritual decay of modern affluent society. Natty, they’re a bunch of brain dead morons!’

‘Jesus your Majesty! You’ve gone all Prince Charles on my arse! I just wanted a nice quiet, contemplative day out at the Forbidden Palace, looking at some lush treasures that some rich dude put together back in the day. Like Antiques Roadshow does China.’

‘Furthermore, we must stop all the wars. Troops and guns and deployments and turmoils? What is the carbon footprint of blowing up all those houses then rebuilding them? War is good for business but terrible for the environment. No matter whom you worship, only we can save ourselves from environmental catastrophe.’

‘And nuclear, another unresolved issue of our time, needs to be put safely back in its box. Forever. Uranium is too hard. Sure, there are no greenhouse gas omissions from nuclear, but when it goes wrong, it goes really really wrong. We must not forget Chernobyl, Fukushima. We must turn here to that bible of popular culture The Simpsons. Get your cues on nuclear from that evil little character who refuses to die, Mr Burns. South Australia, what are you clowns thinking?’

‘Remember the telemovie The Day After (1983) starring John Lithgow? We must endure the attack segment, 5 min 53 sec, and witness the devastating (and hopefully remaining fictional) effects of a nuclear attack on Kansas City. You can access this footage by pressing the link below to YouTube,’ said the Emperor gravely.

The Emperor plops down, recouping his spent energy. He is almost post coital in his relaxation levels. He slumps into his customized Deer Antler Throne.

The dream now takes us to the Emperor’s exhibition at the NGV, the most visited arts institution in Australia.

‘Emperor,’ I stammer, ‘How did you end up speaking of environmental issues?’

‘Look to the National Gallery of Victoria’s Principal Partners’ says the Emperor, patiently.

‘But I never look to the Sponsorship deals, I’m an artist, I make art, I look for it everywhere. I’m not showing at the NGV, you are. It doesn’t concern me surely?’

‘You already know the answer to that. BP hijacked the Tate Britain. Remember Transfield and the last Biennale of Sydney? Rio Tinto is the principal partner of my show. They are sullying my good name and improving their own through association with my art, my character, my legacy.’

‘But Emperor. Rio Tinto is one of Australia’s most prestigious, Blue Chip, high yielding, dividending, corporate giants! Our economy is linked to the price of the iron ore. You can’t question this industry. What about the jobs (gasp)?’

‘Rio Tinto are uranium mining, corporate monsters. They’re at the cutting edge of messing shit up. Big-time and forever,’ states the Emperor, with Zen like detachment.

‘Rio Tinto don’t clean up their own mess. Everywhere they go they make a lot of mess. It’s unsustainable and its harming your planet,’ says the Qianlong Emperor.

‘Exclusion of a company from the Fund reflects our unwillingness to run an unacceptable risk of contributing to grossly unethical conduct. The Council on Ethics has concluded that Rio Tinto is directly involved, through its participation in the Grasberg mine in Indonesia, in the severe environmental damage caused by that mining operation.’

Qianlong Emperor: ‘Sure I’d burn the odd book, the odd poet, but why is your government tapering its funding of the Arts? Your country gives more financial support to the coal industry! You should get some tips from them. Where are your arts advocates? Corporate sponsorship deals cost too much, ethically speaking. The lack of government funding of universities has already influenced thought. Remember Marcia Langton and the hoopla over her Australian Research Council Linkage Grant being funded by mining groups? Another day, another ethical dilemma.’

Qianlong Emperor: ‘Do you remember Rio Tinto Zinc and the Bougainville Cooper Mine? My research found this documentary; it has to be seen to be believed. A memorable line is:

‘the Leader must clean the boots of his people. We don’t want our descendants to say our forefathers didn’t give us a good future. They’ve spoilt things for us and thrown us away.’

‘But Emperor, please, it’s too much. I just want to do my coloring in art. Stick down the shells to the puppy sculptures to make it look like fur. Do artists have to do everything?’

The Emperor leans down to pat my puppy. They are very tactile. ‘Do you want to buy my Puppy sculpture? It’ll look great in your collection. Careful Emperor! You break it you bought it!’ I warn him.

And then I woke up. 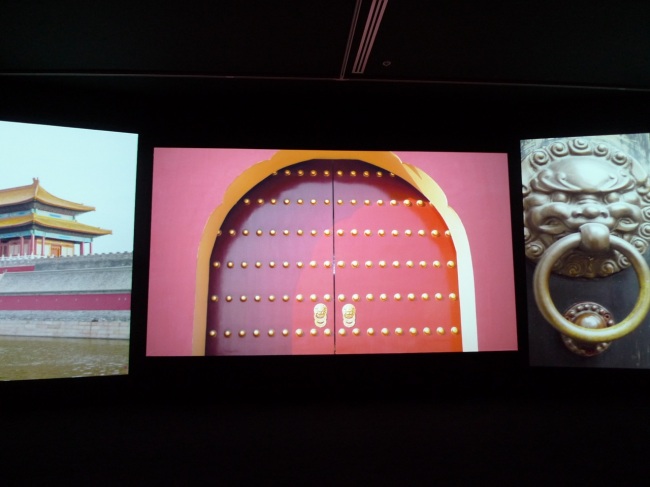 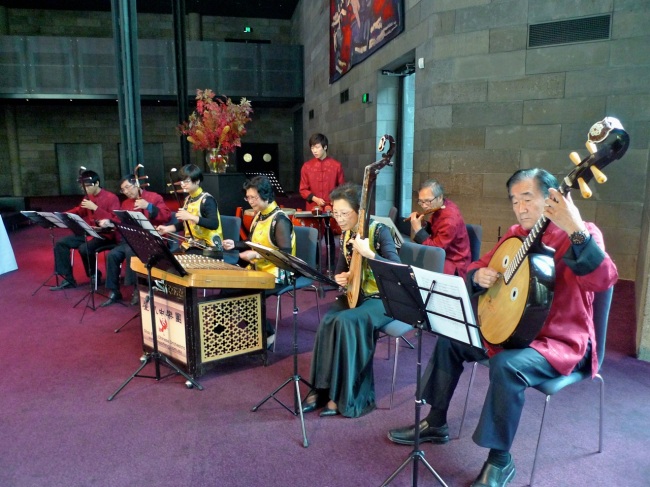 Thomas Deverall and the book of his design

A Golden Age of China 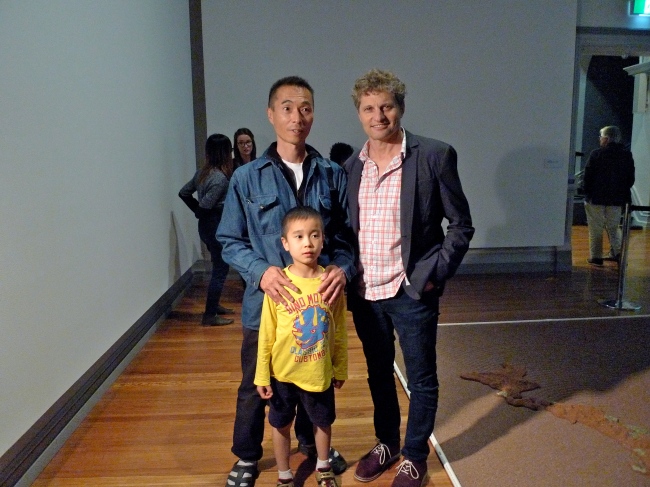 ← Wearing a Onesy to Boogie MUMA: Believe Not in Every Spirit →