I sit on Emily Floyd’s new public art commission at the NGV, The Dawn. The work is named after The Dawn: A Journal for Australian Women, which was edited and published by feminist Louisa Lawson from 1888 to 1905. Emily’s The Dawn is part sculpture, part library, and about ‘Feminism, activism, the printed word, open access, social encounter, and stacked with polemical texts sourced from Melbourne’s Victorian Trades Hall bookstore.’ Women, polemics, words: I started writing…..

(International readers please note, Tony refers to our current PM Tony Abbot and Julie corresponds with Julie Bishop, the only woman minister he named in his Cabinet.)

‘What’s the problem Julie, have you caught the flu or is it “woman’s things”?’

‘No. I’m taking a mental health day. I’m stressed out of my brain.’

‘Julie, toughen up mate! Is it the menopause again? This Government needs you. The women of Australia need you. You can’t have a day off because you’re feeling a bit blue or flushed! Actually Bisho, you can never have a day off.’

‘You represent all Australian women mate! Well, the white, rich ones…’

‘Tony it’s hard being the only woman in your cabinet’

‘Here we go! Grab your hankies!’

‘Tony. One woman can’t and shouldn’t represent a gender within a Government.’

There’s a resigned sigh and the sounds of an Angry Birds game from Tony’s end. The fire bubbles up in Julie Bishop’s soul and she spits into the phone:

‘Tony, it’s not my bloody fault I’m the only woman you appointed to any Ministerial position in your whole Government! It’s too much Tony! Too much! I’m really feeling the pressure, I’m representing a lot of interests here Tony. A lot of women look to me as their only voice.’

Silence, he’s taken aback. He’s given her so much; her ingratitude is a slap to his face. There are a lot of other Australian women knocking at the door after all. Quite a lot actually…She breaks the continuing silence

‘And I feel like a fool for having to tell Barack he was wrong about the threats to the Great Barrier Reef. He understandably wants to show his daughters our precious natural wonder, off the coast of Queensland. And in a few years (God Willing) their kids, his Grandkids. Meanwhile, we’re building ports for coal gas exports along the coastline and dredging the fuck out for bigger container vessels… I felt like a bloody fool Tony!’

‘What about the jobs we’re creating Julie?! Fracking’s hard work for those blokes and Australian Women benefit too! Whose going to do a bit of book-keeping and cut a few sandwiches? Honestly!‘

‘Couldn’t you have asked Hockey to take him on? The issue’s about money. It’s about mining, agriculture, the developers. Our man, little Campbell Newman, is doing it tough up there. He’s former Army and very efficient. He’s a good bloke, his wife’s all over him at Press conferences. Anyway, it’s the Treasurer’s job to tell Barack off more than mine Tony. Remind Obama we’d take a bullet for him if there’s a good photo op there somewhere.’

Tony tilts his head to the side, even though he’s on the phone

‘No. I’ve done you another favour there Julie. The electorate likes their female politicians tough. If you want to play with the big boys up here in the big leagues you’ve got to be tougher than said big boys. Channel your inner Maggie Thatcher mate and you could end up in the top job. When I’m finished with it.’

‘Don’t worry Julie, that mess with Barack was a major cock up. Barack veered completely off script there and I said to Barack, I said: ‘We’d take a bullet for you guys Barack, you’re our closest ally. Now start acting like the mates we’ve stuck by through wars thick and thin and stop publicly stating the obvious about our environment.’

‘Hey Julie, who’s daughters are better looking, Barack’s or mine?’

Stony silence. He tries for the save

My girls are older and a bit fairer. It boils down to if you prefer blonds or brunettes. Eh Julie? Eh? Shit Julie, you are in the wars. It was just a bloody joke. Get over yourself…’

On the attack now

‘I hope you’re not getting too big for your boots since you’ve been named the Most Powerful Woman in Australia by the Australian Women’s Weekly. That publication is the bible for Australian Women. I worked hard to get Ann Peacock on the list of judges for The Power List. Did you see my chief of staff Peta Credlin came in at number two? And no ones even heard of her. I pulled the strings there too. And we kept Christine Milne off the list too. Christine will be spewing.’

Julie’s starting to feel sick in her stomach

‘Look Tony, I’m not coming in, I’ll see you tomorrow. Put it down to a bad hair day. We all have them. The people who still have hair that is.’

He stops sniggering. He must have the last word

‘Julie can you get a Doctors certificate for your day off so we don’t have to dock you a days pay?’

The trials of Louisa Lawson in the 19th century tell us a lot about what we’re in for, well into the future. She was faced with pressure from the Trade Unions, because The Dawn was produced by an all-women team of editors and printers. This fact angered trade unionists in the New South Wales Typographical Association in part, because women were paid substantially less than men. In fighting The Dawn, the association argued that the discrepancies in pay were such that men would be unable to compete, as women would be:

“… Able to work for half the wages a man would require to keep himself and family in comfort and respectability”, as well as arguing that the work was too dangerous for women to engage in.

The association attempted to boycott the publication and at one stage a member visited their offices to “harangue the staff” – only to be removed after having had a bucket of water thrown on them by Louisa Lawson.

These days it seems like it’s still 1888 and women don’t have the vote yet. Let alone women in key Government positions making decisions that will directly affect this nation. If I voted Liberal last election and then Tony Abbott blamed the women he’d excluded for not quite yet being up to the job, well I think I’d be a bit pissed. There hasn’t been much venting really from Liberal women. It reminds me of the recent Yes/No Scottish vote. The No’s getting up tells us that the Scottish majority have been so downtrodden for so long that they no longer believe they could do a better job than the English at ruling themselves. It’s sad. It’s the same as women not expecting more representation in Government. It’s like we’re saying ‘OK fellows, you rule us, we trust you’ll do a better job than we ever could.’

The National Library of Australia only recently digitised The Dawn on Trove following the successful crowd funding campaign of Donna Benjamin (big ups Donna, thank you).

Our National Library didn’t have enough money to digitise a significant part of feminist history. The Dawn had a strong feminist perspective and frequently addressed issues such as a woman’s right to vote and assume public office, women’s education, domestic violence, women’s economic and legal rights. Still relevant today.

I thought to myself, I thought, this is how they do it. How they marginalise women’s contributions to culture: by passively (but consistently) saying, wait a minute, don’t be impatient. We’ll get there in the end. Together. We’re with you on this.

Have you heard of the Stella Prize? The Stella Prize celebrates the great work of Australian women writers and advocates for the inclusion of books written by women to be included in Senior English School syllabuses. Some how or another, books written by women keep slipping off the list and if a whole generation of kids graduated from High School with the assumption that men are better writers than women, that wouldn’t be a stretch. The fact that in 2014 The Stella Prize has to exist is a national bloody disgrace.

It’s hard to see a play written by a women and there’s another advocacy group for that too.  This group is based in LA, different country, same old story.

Julie Ewington certainly knows her way round an Emily Floyd. And in what many were loudly declaring to be the Opening Address of the year, Julie told us the story of the title of Emily’s survey show at the NGV, The Dawn. On June 15, 1888, Louisa Lawson wrote in her Editorial ‘About Ourselves’: There has hitherto been no trumpet through which the concentrated voices of womankind could publish their grievances and their opinions. Men legislate on divorce, on hours of labour, and many another questions intimately affecting women, but neither ask nor know the wishes of those whose lives and happiness are most concerned. 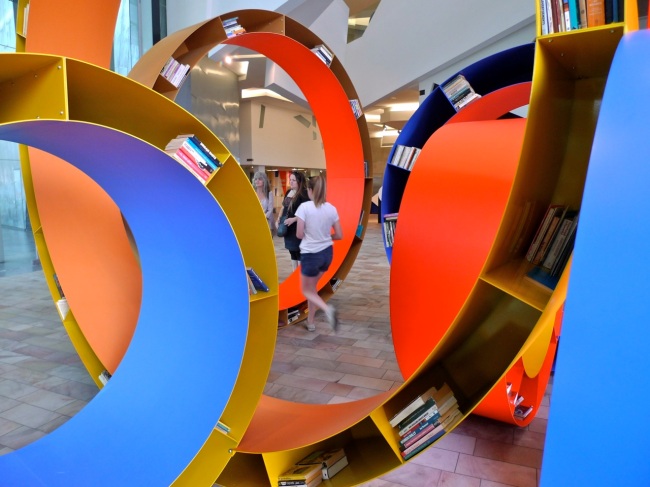 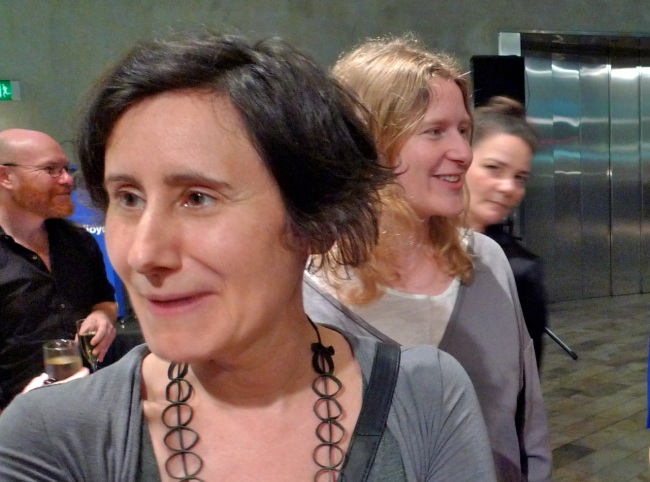 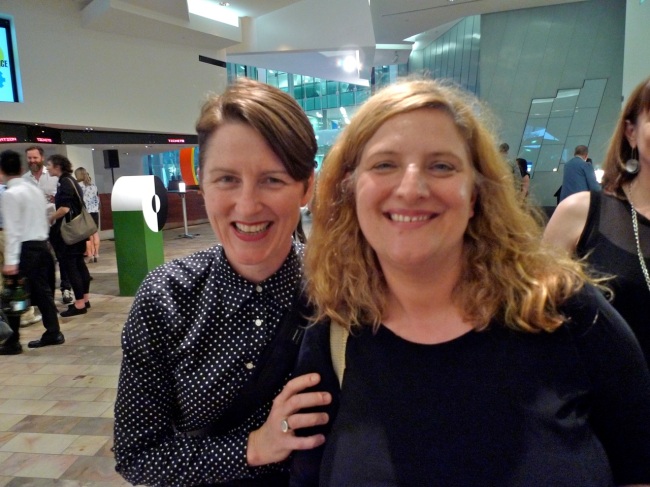 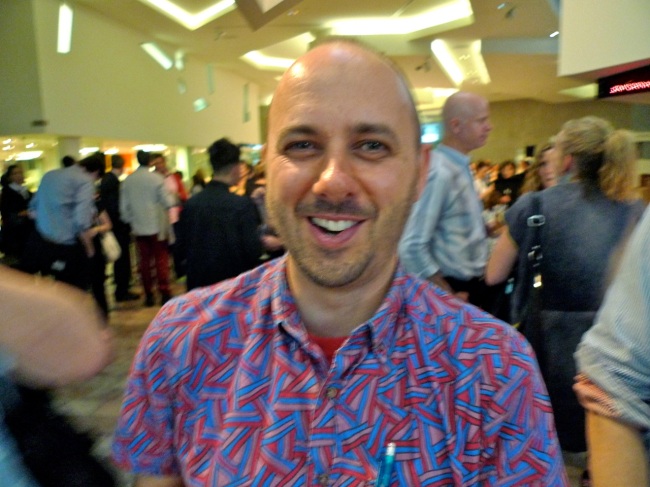 The Dawn by Emily Floyd, books from Trades Hall