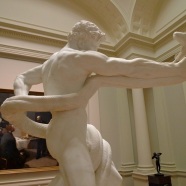 Going down in History

(Please Note- I’ve researched America because reading about Australia is depressing and we’re almost completely culturally colonised by them now too. I’m increasingly upset about being Australian.)

Like a bunch of starstruck contestants hogging the mic on the reality TV show that is life, men monopolize the spotlight. The rule of thumb is, anywhere there’s a lot of money, power and prestige, you’ll also find a disproportionate number of men. Men pretending they’re not hogging the limelight. Men expecting us to all go along with their charade, rendering us somewhat complicit. I’m reminded of that quote from evil media mogul William Randolph Hearst. This is the guy Rupert Murdoch got his ideas from. William Hearst is dead, thank god, but he’s on Wikipedia because he was so goddammed rich and important. https://en.wikipedia.org/wiki/William_Randolph_Hearst

‘It’s a good thing that women are so easily manipulated,’ quipped Randolph, ’otherwise, most of us wouldn’t be here.’

‘Who narrates the world?’ asks the OpEd Project? http://www.theopedproject.org

And here’s your prize! Talented young woman down the front, recent graduate of an expensive degree in Journalism, chomping at the bit with excitement at the prospect of commencing on the path of what is sure to be her Brilliant Career, narrating the world. IT’S MEN!

The OpEd Project‘s mission is to increase the range of voices and quality of ideas we hear in the world. A starting goal is to increase the number of women thought leaders in key commentary forums to a tipping point. We envision a world where the best ideas – regardless of where they come from – will have a chance to be heard, and to shape society and the world.

The OpEd Project, based in New York, monitors the gender breakdown of contributors to “public thought-leadership forums,” a participation rate of roughly 85-to-15 percent, men to women, is common — whether members of Congress, or writers on The New York Times and Washington Post.

Somebody needs to tell these clowns (men) they’re not as good as they think they are. Men can’t hang up a wet towel, but they can dominate the public discourse. They can wage a precise defensive military campaign against women that brings to mind the Spanish Armada. The men are the English, sending the fire ships into the Spanish fleet, representing the women. Some of us get burnt, some of us scatter, some of us go down on the way home in a big storm. Nightmare. And all we wanted to do was to have a go at narrating the world for a bit, but oh no.

If a woman writes a book, men try to sink it – http://www.vidaweb.org/about-vida/ Women in Literary Arts.

Oops apologies, my premenstrual tension is getting the better of me. Can’t see the wood from the trees here. Rather than pulling these egotistical assholes down to size, it’s best for all humanity, that we women put ourselves forward more confidently. Because it’s all our own fault that we continue to be marginalized! I’m not buying that line, not for a second. I don’t want a 50/50 split, I want women to have our go at running the place and monopolizing the airwaves.

Open Source is more open to those with junk dangling from between their legs than to those without junk. Tackle helps men tackle life’s more irritating and repetitious challenges. Like getting a good job. Or like getting a page on Wikipedia. And keeping it.

Wikipedia doesn’t know how it happened that women and the interests of women are underrepresented on its pages. You can’t finger anyone with ultimate responsibility for the gross injustice of under-representing the accomplishments of half the population. It’s just a weird nuance and it means nothing you neurotic, hysterical bitches.

‘You get whatever accomplishment you are willing to declare.’ Georgia O’Keefe

‘I think what’s important is to give space to the range of human experience.’ Judy Chicago

There’s not a pattern of under representing the efforts of women within society; of cocksure white men grabbing the big jobs, the powerful, prestigious positions with the big pay packets and living the dream. That’s all in your over imaginative brains. White men with inflated senses of self worth, no, they’re not everywhere you care to look. No.

Being a woman is a service industry. An underpaid service industry. Once the needs of every man and child on the planet is sated, then the woman is free to edit Wikipedia. Only once the kids have left the nest and the husband is dead, does the woman get a chance to prioritize herself, catch some beams of sun. If you want to know why women don’t spend more time contributing their knowledge to Wikipedia, look to the kitchen, the grocery store, the school pick up or the pool for swim lessons, that’s where the women are. http://www.theguardian.com/society/2012/mar/10/housework-gender-equality-women

Jane Margolis, co-author of a book on sexism in computer science, “Unlocking the Clubhouse,” argues that Wikipedia is experiencing the same problems of the offline world, where women are less willing to assert their opinions in public. “In almost every space, who are the authorities, the politicians, writers for op-ed pages?” said Ms. Margolis, a senior researcher at the Institute for Democracy, Education and Access at the University of California, Los Angeles.

It would seem to be an irony that Wikipedia, where the amateur contributor is celebrated, is experiencing the same problem as forums that require expertise. But Catherine Orenstein, the founder and director of the OpEd Project, said many women lacked the confidence to put forth their views. “When you are a minority voice, you begin to doubt your own competencies,” she said.

The Wikipedia-edit-athons are happening everywhere. Women are teaching each other how to edit Wikipedia’s online content. There’s more sessions scheduled for Melbourne in January. Thanks to Caroline Phillips and Dr. Juliette Peers who ran a fully attended session at the State Library last Saturday. Helping us find the keys to the clubhouse, so to speak.

If there’s consensus on one issue within and without Wikipedia, it’s that the male-female ratio of Wikipedia editors and administrators — 85 to 90 percent of them are male — does create a gender bias, said Maia Weinstock, a Wikipedian who has been instrumental in raising awareness of the imbalance. http://www.nytimes.com/2014/01/09/fashion/Wikipedia-Judith-Newman.html?_r=2

Back in Australia, just 6 of the current 23 Council of Australasian Museum Directors (CAMD), are women. That’s the fault of women too. The boards of the galleries and the museums that appointed men over women at alarming rates aren’t an antiquated and outdated group of networked up old men feeding off our cultural capital. Using our galleries and museums like a day out at the polo. That’s a vicious rumor being spread by disgruntled women. The female applicants didn’t quite have the required experience for the job at this particular juncture in time. The men on the boards wish the unsuccessful female applicants all the best in their future careers. They really do. Thank you and goodnight! Dim lights, women exit, dejectedly, stage left. Repeat.

I’ll be a public thought leader. There’s nothing better to do. I’ll put my hand up and say what I think. Assert my opinions in public and everything I will. I’ve got a daughter, I’d love her not to have to continue to tally gender inequality in whatever field she wishes to work. That would be a bloody excellent gift to her. Then she could just move onto the good stuff. Women all over the world are spending a lot of time counting the injustice against them.

I reckon we should just storm the joint and take over now. We won’t do any worse job of ruling the world than men have already done. And continue to do.

‘After the collapse of socialism, capitalism remained without a rival. This unusual situation unleashed its greedy and – above all-  it’s suicidal power. The belief is now, that everything – and everyone- is fair game.’ Gunter Grass

‘Step aside assholes!’ we’ll holler, ‘we’re going to have a crack at this monopolizing power thing now! You’ve had your turn and your time is up’.

Alex Monteith and Casey Jenkins edit up a storm

Another day at the office

As If festival Producer Sally Northfield 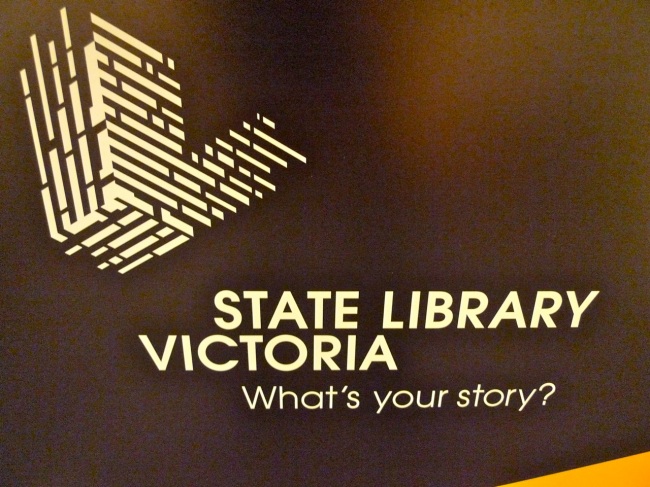 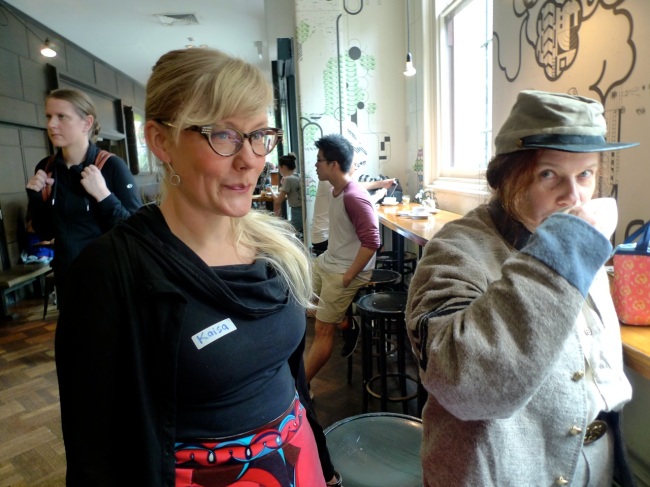 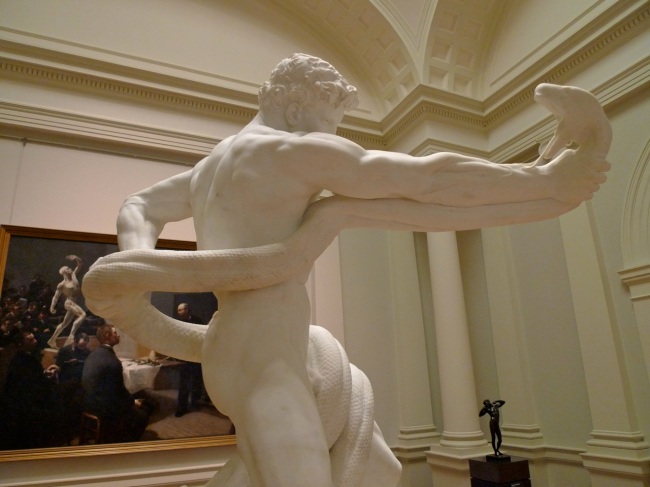 Writing ourselves into history 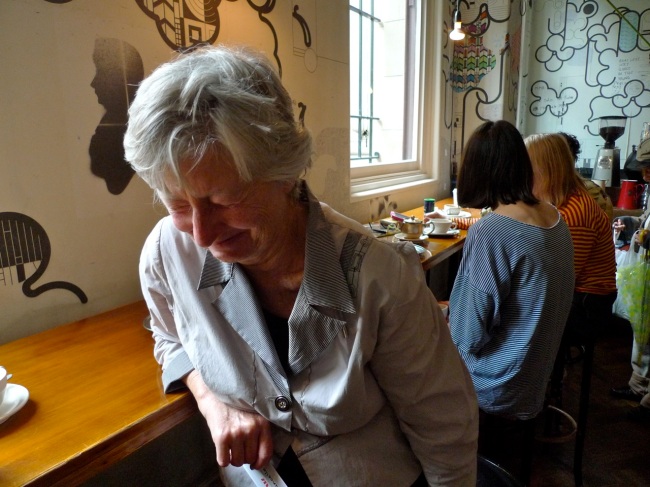 Gail Stiffe cracks herself up

If you close your eyes for a moment, the men have circled your wagons 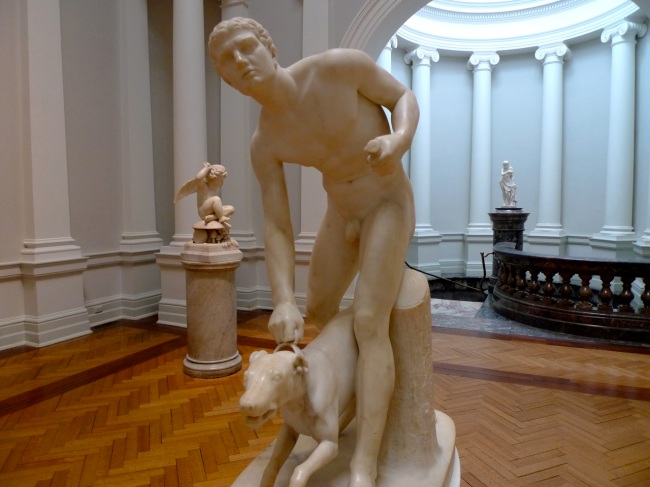 Man and his best friend