Home » Multi-national corporation's infiltration of art museums » Addicted to Fashion: The House of Dior at the NGV

Addicted to Fashion: The House of Dior at the NGV

‘Women, with their intuitive instinct, understood that I dreamed not only of making them more beautiful, but happier too.’    Christian Dior

By God, men have a tendency toward getting rich and speaking shit. Being more beautiful will not increase women’s happiness. Equality will.

Dior at the NGV isn’t the first time the NGV have helped LVMH along with their sales. Last year the NGV showcased Italian Jewels: Bulgari Style, Bulgari is the hard luxury (jewels and watches) part of the LVMH Empire. So it’s an exciting partnership building up between the worlds largest luxury group and Australia’s largest art museum. Thank God they’re here to help us out again.

Another day, another exciting Fashion Show opens at the National Gallery of Victoria, Australia’s largest art museum/shopping centre. The NGV (AKA Chadstone by the River) celebrates Seventy years of Haute Couture from the House of Dior. And no expense has been spared by the publicly funded NGV in its presentation of the LVMH owned fashion label Dior. The NGV is an excellent blank canvas on which to advertise products from the world’s richest luxury conglomerate. The super rich, foie gras set love luxury even more than art. Fashion doesn’t make you think, plus it’s big business and the super rich love business most, because that’s how they got rich.

FRANCE’S tradition of making exquisite luxuries dates back at least to the court of Louis XIV. The sun king financed ébénistes (cabinet-makers), tapisseurs (upholsterers), menuisiers (carpenters) and other artisans who made beautiful and largely useless things for the court of Versailles. Bernard Arnault might be his heir. http://www.economist.com/node/21556270

Selling luxury is a fickle business. Artists know all too well that product is only worth what people think it’s worth. Or not worth. Luxury is all about image. As hyper-capitalists, fashion empires want everyone to buy their products yet they must retain some semblance of rarity too, to warrant the exorbitant price tags.

There’s nothing more rare than a museum retrospective.

Seventy Years of Dior at the NGV is something for the Ladies. Ladies Fashion being big business, we women are a frivolous bunch over-invested in how we look so we’ll be there in droves. You can sell women anything, so long as their husbands are wealthy enough. Of all the areas in which women are complicit in our own repression fashion is the frilliest.

Women are ADDICTED to fashion. https://www.youtube.com/watch?v=fPqeGfsuOd4 32secs Do I look hot right now? Are you addicted yet? Clearly targeted at the youth market, this advertisement follows the get ‘em hooked early marketing strategy. Lipstick is a product anyone can afford.

So what are we celebrating in Christian Dior, the man who in the post war period yanked Rosie the Riveter out of her overalls? Dior cinched in Rosie’s waist, pushed her tits towards the heavens, fitted layer upon layer of petticoat and undergarment, and completed the look with a flouncy frock, matching hat, gloves and handbag. Rosie’s new wardrobe sure did keep her busy, but she’d gotten sacked from her job so she had time on her hands. The jobs were kept for the men returning from WWII, Rosie was to be the dutiful wife, mother and homemaker again. The patriarchy has always deprived women of economic independence, it’s one of their main areas of control over us. It’s why equal pay for equal work never works out.

After the horrors of the Holocaust, Christian Dior identified societies need for escapism, a return to tradition and a re-embodiment of femininity in all it’s stitched up rhetoric. Gone was the fabric rationing, Dior designed women as flowers, fecund reproductive vessels attracting what is needed to procreate a new generation of cannon fodder. Just in case.

‘After women, flowers are the most lovely thing God has given the world.’

Christian Dior was an overnight success with his New Look formula for women. Early clients included Princesses Elizabeth and naughty Margaret. The Royal Family inherently understand the power of costume, pageantry and spectacle in differentiating themselves from we commoners who are paying them.

Let’s skip forward to the present day: The House of Dior has appointed a woman as head designer. Yay. ‘Everyone should be a Feminist’ declared the $700 T-shirt designed by Maria Grazia Chiuri as one of her first orders of business. ‘The idea of paying $700 to wear a Feminist slogan, ripped from Chimamanda Ngozi Adichie’s essay of the same name, is an incredibly privileged way to flex support for a set of fundamental human rights.’ http://www.highsnobiety.com/2017/08/09/asap-rocky-dior-feminist-t-shirt/

https://www.youtube.com/watch?v=IOSU85abB9M 44secs It Girl Spokeswoman actress Jennifer Lawrence says it’s a great experience, wearing clothes designed by a woman who understands a woman’s body (for a change). Jennifer says: it’s exciting to work with a woman photographer because frankly there aren’t that many. Fact check, register 9.

Maria Grazia Chiuri’s T-shirt is yet an example of a white woman appropriating a black woman’s art for financial gain. Grazia Chuiri co-opted, cashed in and watered down Chimamanda Ngozi Adichie’s Feminism.

Feminism isn’t about shit to buy. Feminism is about not buying the shit. Business derailed Feminism’s second wave, they’re at it again now. Following the public outcry over Dior’s ludicrously expensive Everyone should be a feminist T-shirt, the company announced a portion of profits from sales would be donated to Rihanna’s non-profit Clara Lionel Foundation, that Rihanna had established to help support women experiencing domestic violence. Governments run by men continue to wind back support services available to women experiencing domestic violence.

Speaking of addiction, you’d think Dior wouldn’t be using the idea of addiction to sell us lipsticks. Addiction already got Dior into a whole lot of trouble. Fashion has more drug pigs than a 1970’s rock band descending down the charts. John Galliano’s ‘I love Hitler’ diatribe was attributed to drugs: a toxic mix of red wine, anti-depressants, cocaine, celebrity and taxing work deadlines had let his inner fascist out of the bag. https://www.youtube.com/watch?v=HUKGqhlRXH0 John Galliano speaking at a Brasserie in Paris.

Footage of the conversation goes viral, the Fashion Empire cleans up his mess and attempts to contain the brand damage posed by their star anti-Semite by severing ties with the troubled genius designer. Critics wonder when Haute Couture lost its humanity and John Galliano’s 7th Dior collection in the Spring of 2000 is sited as another contender. Inspired by the homeless chic of people sleeping rough along the banks of the Seine, he said: ‘some of these people are like impresarios, their coats worn over their shoulders and their hats worn on a certain angle. It’s fantastic.’ https://www.youtube.com/watch?v=Xh0ejocHHrU

The collection appalled social welfare advocates everywhere, but you don’t need to be getting your knickers in a knot because this dubious work has been edited out of the presentation of the Dior story at the NGV. Melbourne is ‘The World’s Most Liveable City’ despite increasing homelessness.

Dior ain’t all bad, just mostly. If you were to celebrate any achievement of founder Christian Dior (1905-57) it would be that he was kind and fair and therefore popular with all his employees. As anyone who has suffered under a boss who’s making their life hell, you’ll understand this is no small achievement and should be acknowledged as such. There’s nothing worse than working for a boss who’s doing your head in.

Speaking further to workplace relations, and the diminishing rights of workers in a world were the generation of ever increasing profits is the only measure of success, here’s the trailer for a mockumentary style film that is a surprise hit in France. The film follows the Klurs, whose small suit making factory in Northern France is closed by LVMH who choose to relocate production to Poland. You’ve got to hand it to Bernard Arnault, France’s richest man, he’s always on the lookout for ways to increase his margins. Enough is never enough, but hey it’s just business. https://www.youtube.com/watch?v=ch0HsuYu_TI 1.34 mins. Thanks Boss/ Merci Patron (2016).

The sound track from this film has gone viral too. It mercilessly hangs shit on bad bosses. The tune is being chanted by workers demonstrating for better employment rights and conditions throughout France. If you were working in a toxic workplace, not in France, but say here, in Australia, in Melbourne, you might listen to this song on your little ear buds. It will help you endure another day. Bad bosses are terribly common. https://www.youtube.com/watch?v=fMZ5ymIo9ck 2.46 Merci Patron song with English subtitles; Thanks so much boss, what a pleasure to work for you.

Museums are not just the custodians of objects and paintings, prints and drawings, ceramics, design and fashion and textiles, they maintain and preserve our values as well. The NGV is preserving the perversities of late capitalism as clearly as light is to day. The values being enshrined by the NGV are the same as the values of the shopping centre, your worth is judged by what you can afford to buy. Christian Dior and Bulgari Jewels are signifiers of wealth, success and privilege, they are the trinkets of the super rich who haven’t had it so good since the days of Louis XIV. The thing I used to enjoy most about visiting art museums was that they offered a reprieve from the consumerism that pervades our lives. But not anymore, now it’s all the same diff. The museum is the shopping mall.

I wish we weren’t buying it. 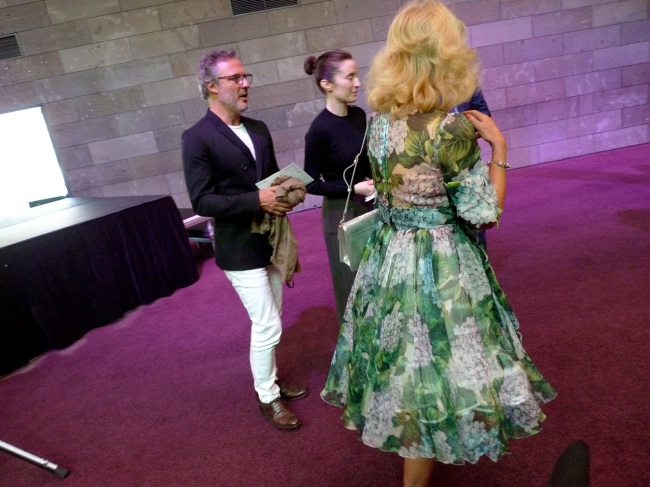 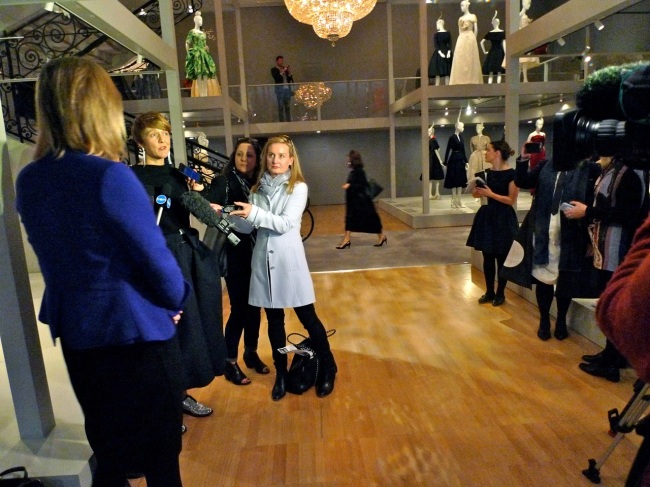 John Galliano for Dior, before he got the boot

They’ve built in a second floor, with sweeping staircase and chandeliers

How do they do it? Here’s how. You could speak to these workers from the atelier. They’ew French, but they had an interpreter

I bags being the chick with insect dick on my head 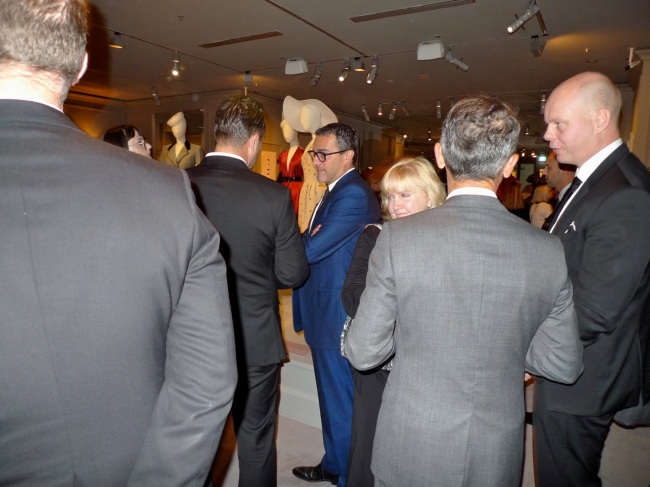 ‘Round and ’round they go… 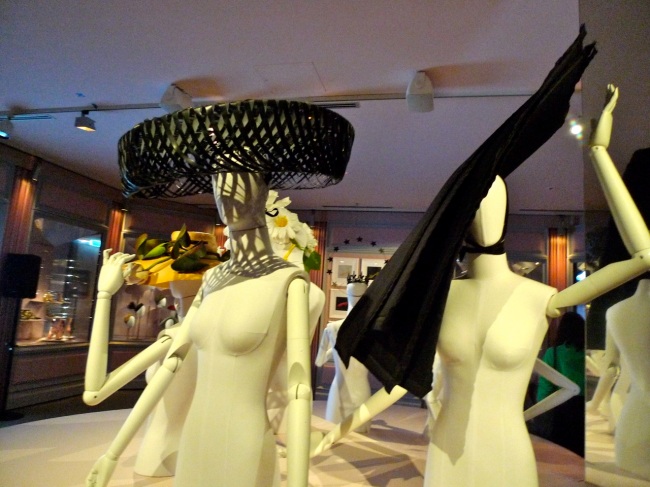 Prince Charming is a bloody no-show

Frou-frou skirts and some cool hats

Any girl can be a Princess

Shopping at the NGV 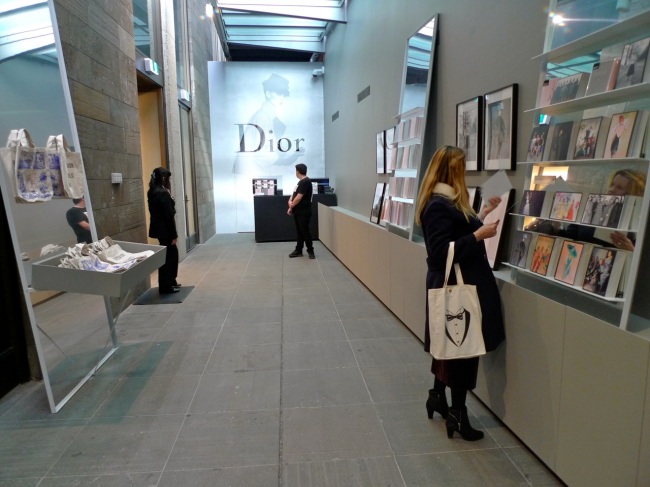 Exit through the gift shop

← Unpacking Gerty’s Move The Developer, the Dealer, the University and the Art Stars: Buxton Contemporary →