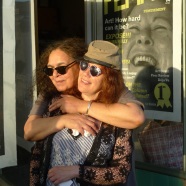 Recently, cartoonist First Dog on the Moon wrote And now all Australians are forced to ask themselves ‘are we just a nation of entitled misogynist thickwits?’ Obviously the answer is yes but it looks like we need to go through it one more time so………..

The best thing about Tony Abbott’s reign, was that his rule in government so blatantly favoured men; that the smarter and slippery-er bastards that can mask their gender bias with more sophistication had no where left to hide! He he. See what I did there, I played the old double negative positive manouevre: the one where you slag someone off mercilessly but pretend it was a compliment. Kind of sort of a nice thing to say because you are a rational and thoughtful individual, not prone to hysterical outbursts. Unlike Tony. Under Tony (ugh!), the cards dealt to women saw us holding a hand so dud, we’ve got nought to zero chances of winning. A hand so bad maybe even our daughters can’t fix it within their adult lives. Pay disparity, violence, disrespect, women are societies most disenfranchised group. The saying shovelling shit uphill springs to mind. We are at war, war against our oppressors.

Art in Australia has a complete inability to laugh at itself. To hang shit on, to rip the piss out of, Australian Art, is to leave a lot of intelligent but institutionalised people scratching their heads and asking I don’t understand what they mean by saying that You could write a thesis on the inability of art to deal with humour, during a time when the Comedy scene here is going gang busters. People need a laff so much comedy doesn’t even need Government funding to exist. People (let’s call them the public) can smell a fish on the turn where art is concerned, and I reckon they’re right. It is within its use of language that art reveals itself to be a pretentious wanker.

Art complicates the meaning of words, and most artists begin to practice writing the complex sentences that have no meaning at art school. Art Schools are very, very funny places, although not a lot of people are laughing. University’s too expensive to be funny. Universities are almost as dysfunctional as hospitals. Or the military. Or Municipal Councils, or State Governments. The University student as client, that’s funny because it basically means the students are holding the staff by their short and curlies. Too many complaints at the end of semester on the feedback form, and staff can be on permanent vacation. Clients, I mean students, really know their way round a grievance procedure today, and any and all attempts at mediation are always comical. Mediation is a rapidly expanding growth economy, as people continue to think differently to each other. So if your art career doesn’t pan out, maybe you can be a mediation counsellor. And call it a performance work. I think I’ll be a mediation counsellor.

At Art School there’s also a heady combination of youth, ambition, ignorance, excessive drinking and art history that makes them hilarious. That, combined with a tenured staff of mid career artist/art lecturers, siphoning off the best and brightest each year for their own work. And getting paid whilst they do it, that is too funny for most to even snigger at. And then, finally, staff, students, more every bloody year, everyone applying for the same funding, trying to get in the same shows, trying to woo the same curators and collector’s. Is a comedic goldmine.

The biggest laugh in art though, is the gapping ravine sized gap between how the art scene sees itself, and how it actually is. It sees itself as generous, liberal, and promoting the work of a diverse bunch of practioners within its galleries. Ummmm. Commercial galleries charge artists such exorbitant fees to represent them that you could get a more competitive rate dealing with the Mafia. Give Gatto Corporate Solutions a buzz, Mick will get your f-ing money back. he even deal with banks.

Big Labels are a Problem (unless you’re signed up to one). The problem within culture, is not in a lack of depth and girth of talent within art; it is a problem of the monopolisation of distribution channels, getting your work out there and seen. That is a problem artists need to address. The same problem exists in music, in film and in TV. Small groups of folk monopolising resources.

Its funny watching Australian art attempt to deal with funny women. Funny guys, sure, no problemo, here, there’s a long standing tradition of everyone loving a larrikin. There’s a few male artists here who work the suburban guy, ordinary bloke schtick for all its worth too. Do very nicely out of it they do. But funny women?That’s a rarer breed right there, and you’ll do better, as a female artist, if you just throw some pretty colours in an eye catching design onto a nearby canvas. And repeat that for the next 40 years or until you die. Or, if design ain’t your thang, a female artist can go down the I can’t believe its not butter route, the one that has the public scratching their heads that it’s not a photograph, it’s really a painting. A photo realist painting that looks just like a photo that they most definitely couldn’t do themselves! Boom Boom.

This week we took to the street to celebrate FEMMO™, an imaginary magazine produced by Virginia Fraser and Elvis Richardson. It is as funny as hell, says what it means, and looks terrific. For the project, collaborators Virginia and Elvis have become magazine editors, throwing the net out and snaring fellow comrades who fight for gender equity in the arts. A lippy bunch of punks they are too, making declarations and asking the questions chauvinists would prefer were left unthought-of, unspoken, unprinted. And most certainly not displayed on posters on the windows of a shop front in Preston, on a tram line near a corner, where hundreds, possibly thousands of commuters pass each day.

Daddy, you can hear the holidaying schoolchildren practicing their reading aloud, enquiring of the parent beside them, ‘What is a gender card? I want to collect the full set! Can you help me make my own Gender Bias testing kit too Daddy, that sounds great!’

‘What are all those women talking about? Why are they sending out a search party to find better rich people?’ child asks Daddy. It will be some time before the Preston fish and chip crowd recover some composure (they sit, bewildered, opposite the installation of FEMMO™ magazines, each night waiting for their dindin’s to come out of the deep fat fryer).

Destiny Deacon dons the inaugural issue cover, Stirring the Penis Pot emblazoned in bold red lettering beside her likeness. ‘I’ll show you artistic desire’ says Destiny, and we step back in wonder at the power of her art and her voice.

There isn’t a patriarchal construct left to dismantle, such is the veracity with which these women attack the art-world’s gender biased systems of power and influence. FEMMO™ promises articles its producers and contributors would like to read. FEMMO™ imagines a world where feminism informs every topic, and in particular FEMMO™ has fun with the art-world’s gender biased status-quo.

FEMMO™ (thus far) exists in an imaginary world where women get whatever they want because its pretty clearly bleeding obvious that women are totally talented and awesome. And deserving. Women are still under valued in a cultural scene favoring men, but more than one institution decided to shore up gender equity disparity within their collection by acquiring the entire suite of 6 FEMMO™ prints. To preserve for all time. Justice will prevail ha ha. Unfortunately, the National Library of Australia declined to issue FEMMO™ with an International Standard Serial Number because it had “no content”. FEMMO™disagrees. Picture the librarians, sitting round the conference table, deciding on the fate of the FEMMO™ ISBN, like a scene from Utopia.

https://www.youtube.com/watch?v=Ochdj85PENs Inside Amy Schumer most viewed 5.37mins. Have a Laugh. 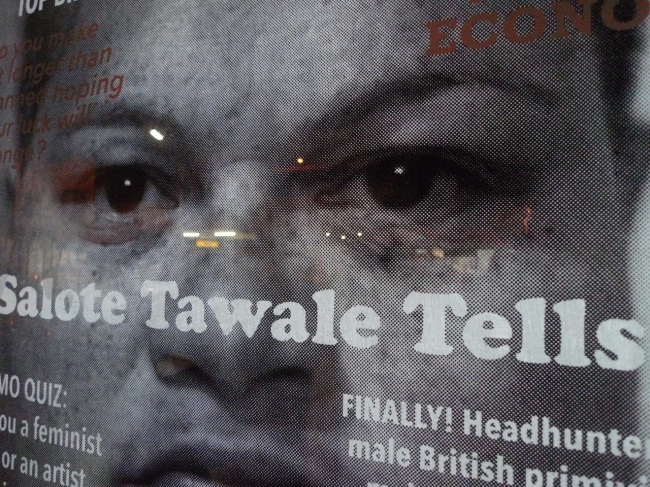 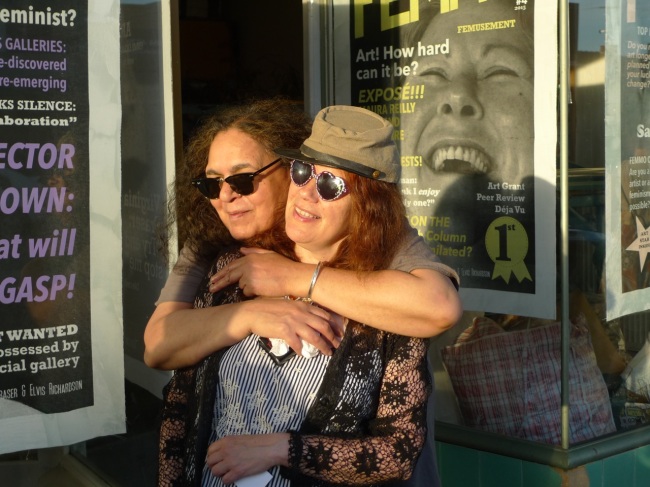 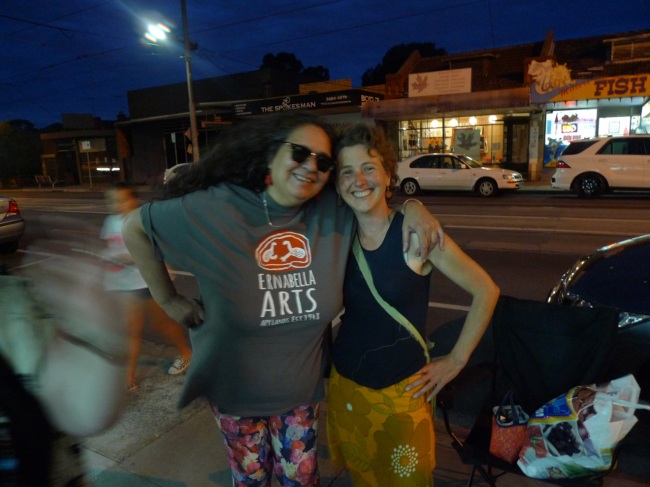 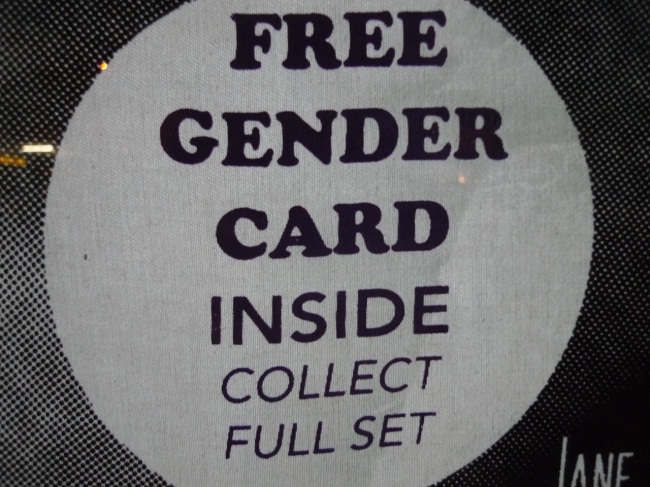 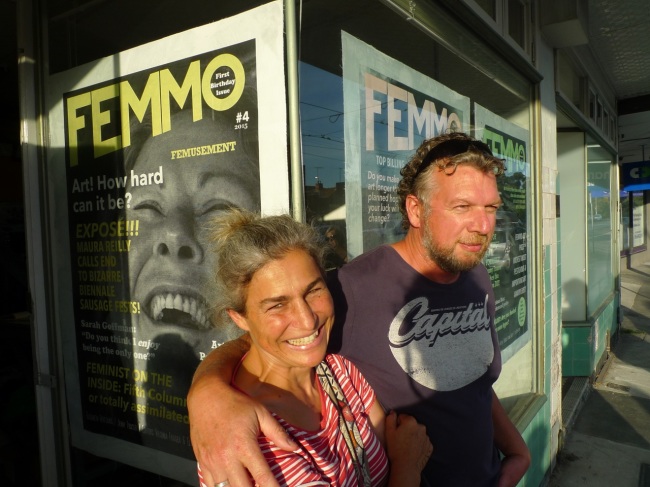